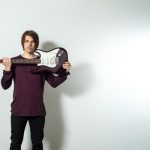 Roberts Petersons (born January 14, 1995) is a Latvian rock and pop musician, singer and songwriter. He started to sing on stage at the age of 3, being only 8 years old Roberts passionately began to study playing guitar.

When Robert was 13, the famous pianist and composer Raimonds Pauls appreciated Roberts’s talents and offered cooperation. Thanks to this offer the young musician had the opportunity to participate in a variety of concerts, performances, TV shows and other events, which gained local popularity. Later, in collaboration with the popular musician and music producer Guntars Račs several songs were recorded, these singles went in rotation on the largest Latvian radio stations right away.

In early teenager years Robert discovered classic rock music, which inspired Robert to continue progressing as a musician, composer and guitarist. Over the years Robert has found his musical calling and currently writes his own music and lyrics.

In 2014 as an independent artist Roberts released his debut album “Apturēts laiks” (Time Stopped). It contains 12 original songs, which were written over period of 2 years. The single “Sāksim no jauna” (Let’s Start Over) gained attention and were in Latvian top charts for many weeks.