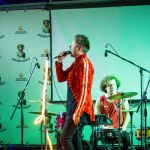 Riga Reggae is a band which first came together in 2014. But since then, they are the only active reggae band in Latvia. There are six men in the band, they play their own songs and also songs from other artists.
Often the two frontmen,Horens and Speiss do acoustic shows and also perform as a DJ’s in bars, clubs and festivals.
Horens is well known as a founder and frontmen of project “Horen`s Big Fish”. He is a DJ, a profesional diving instructor and wrote a book “Midway”.
Ints also known as SPEISS and is a frontmen of musical project “Oranžās brīvdienas”. All of that together they are the band Riga Reggae or as we say in Latvian – positive vibration in Jamaican born rhythms.
PEACE&LOVE / STOP THE WAR