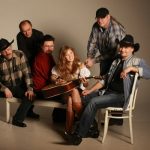 he band Klaidonis was founded in 2001 and since that they have recorded five music albums, played in every Bauska’s Country Music Festival (which is the second biggest in Baltic states) and earned several music awards. The band has performed throughout Latvia, Lithuania and Ireland and continues to participate with good success in Latvian TV shows and is being played in radio stations. In 2007 Klaidonis took part in the national selection of Eurovision Song Contest with the song “My vow to you.” In 2008 they released “The best of” song selection, which included songs from previous albums, the old song cover versions and some new songs.