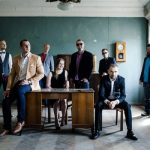 Very Cool People is a jazz-funk, fusion band originated in 2007th in Riga, Latvia. Band have released two albums a self-titled debut in 2009th & „Cruising in the Trolley“ in 2012th, which bout had a great feedback from music critics, both jazz & mainstream audiences. With a backbone in jazz, blues and funk, incorporating influences from rock and hip-hop, Very Cool People is creating an original sound that is characteristic only to them. VCP is an active-giging band in which all the members love & enjoy to perform live shows more than anything. When they are on the stage they “blow the roof off” of the place & charge audience’s batteries with energy that is coming out from the guys when they are in act. The band has a great performing experience which has lead them through a lot of festivals & venues around Europa: Latvia, Lithuania, Estonia, Poland, Austria & Spain. Very Cool People also doesn’t raise any objection to new experiments and experience featuring vocals, MC’s or other instrumentalists. They have worked with different artists (vocalists, MCs & instrumentalists) from Latvia, Germany, UK, USA & Spain.