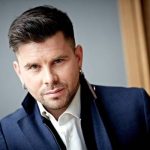 Intars Busulis is a Latvian singer, musician and trombonist. He is a winner of many international competitions, including Sony Jazz Stage 2004 and New Wave 2005. Intars Busulis has performed in the jazz club Blue Note (NYC, USA); as well as in different jazz festivals around the world, like Kaunas Jazz, Nomme Jazz and Jazz Kaar, MIDEM in France, Pori Jazz in Finland, Ottawa Jazz in Canada, International music festival Summertime – Invites Inese Galante and more.

Intars Busulis has released four albums – Shades of Kiss in 2005, КИNO (Film) in 2008, AKTs (Act) in 2010, Citā© (Quote) in 2013. He works in close collaboration with composers Kārlis Lācis and Raimonds Pauls and his songs have reached the tops of radio music charts many times. Intars Busulis is known not only for his outstanding musical talent, but also dramatic skills – he has played leading characters in several Latvian plays and musicals.