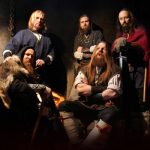 Skyforger has been forging their music in the smithy of the Thundergod Pērkons since 1995. For the last two decades, the band has been fighting under the flag of Latvian Pagan Metal, an extreme blend of traditional Baltic Folk music and various Metal influences ranging from Norwegian inspired Black Metal through to 80s-rooted Heavy Metal. The band’s unique combination of ancient and modern influence has given them a wide appeal throughout both the Metal and Folk scenes, and has brought great variety to their song writing over the course of the six Skyforger albums. Through the years, band has been busy on club and festival stages all over Europe and also has visited USA, South America – Skyforger is well known for their non-compromising live performances. Right now, band is in studio working on their new album “Old Prussia” with expected release date in autumn / winter 2014. Line-up: Peter – lead vocals / guitars Edgars “Zirgs” – bass / backing vocals Edgars “Mazais” – drums / percussion Alvis – guitars / backing vocals