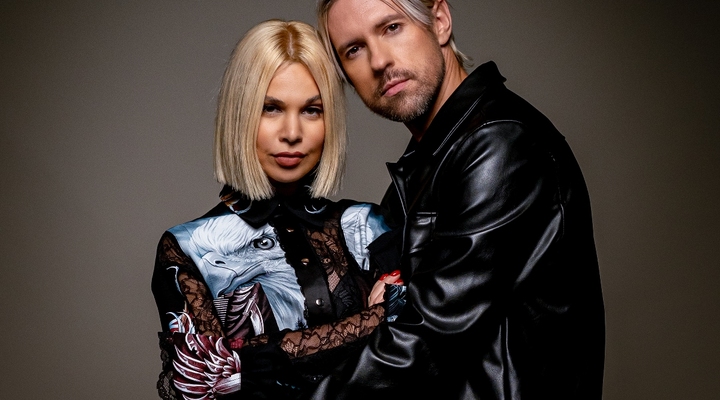 As October drew to a close, the first duet of Markus Riva and Samanta Tīna, called “Man nesanāk” (I Can’t Succeed), saw the light of day. It has quickly become a favourite among audiences and caused great interest in the pair beyond their homeland Latvia. The music video for “Man nesanāk” is out now to complement the track.

The initiative and the idea of the story belong to Markus, while the visual identity of the music video was entrusted to director Pavel Trebuhin with whom Markus has worked for many years. Samanta’s favourite makeup artist Jana Kozlova did the makeup of both stars, and the music video was shot at E. Fon Trompowsky Quarter.

Several exclusive “Fyodor Golan” outfits are featured in the video – the brand, characterized by brave designs and bold colours, was created by Latvian-born designer Fyodor Podgorny, and it’s adored by such celebrities as Lady Gaga, Madonna, Rita Ora, Blackpink and others.

“It’s easy to work with Samanta – I’m very happy she had trust in my ideas and felt confident appearing in the video in a different mode than usual,” says Markus. “Being in a frame with her feels ecstatic – cameras love Samanta, and every second of the video is electrified with her charm and energy.”

“I like to be in charge, so at first it was difficult for me to go with Markus’ ideas and trust his choice of stylists and video crew, but I did it, and I am extremely happy with the result. The stylists did a fantastic job, and the outfits we wore were fabulous; I got to know new designers that I will keep working with. The team was very professional, and I am very satisfied with this cooperation and what we have achieved,” adds Samanta.

As reported earlier, “Man nesanāk” is the third single from Markus’ upcoming studio album in Latvian, set for release this autumn. The production of “Man nesanāk” was supported by the grant of the Latvian Performers’ and Producers’ Association (LaIPA).