“Franco Franco” returns to 90s and unveils bright video for song “Up”. 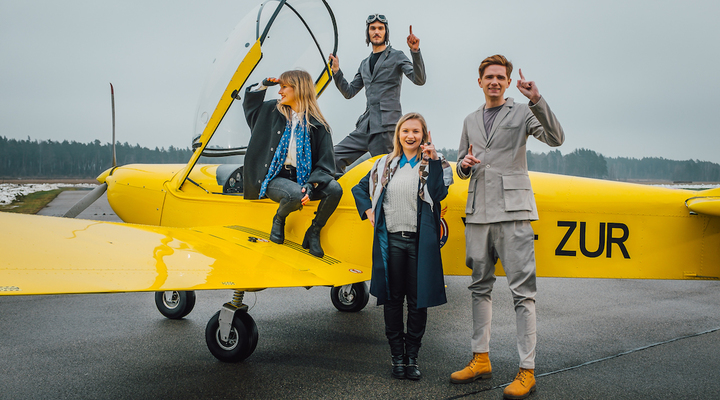 The bright local indie pop band “Franco Franco” unveils the video for the song “Up”, with which they will participate in the national selection for the Eurovision Song Contest “Supernova 2017”. The song is the second single from the EP “Moon + Light”, which is nominated for the award “Zelta Mikrofons” (Golden Microphone) as the best alternative or indie pop record.

“The story of the song “Up” is about a choice we are facing every day — whether to dwell on the past or to overcome difficulties and head forward or up,” the band’s lead singer Elizabete Vētra reveals, adding that the difficult moments in life build up a person’s character.

The director of the video Reinis Spaile (“Steve Spencer Production”) has created „Up” as a short film, referencing the 90s cinema. “The story is about a teenage love — a time when the feelings are vivid and unequivocal. Similarly to the message of the song the story also ends upliftingly with a head-spinning flight,” Spaile reveals.

The video of “Up” was filmed on the Ādaži airfield and in the premises of Cēsis State Gymnasium, where three of the band’s members have studied. The current and former students of the gymnasium were also involved in the creation of the video, fitting into their roles excellently. The cameraman of the video is Jānis Šēnbergs, and the creative director is Zane Priede. The video was created in collaboration with the Cēsis Municipality.

The band will take the national selection’s for the Eurovision Song Contest “Supernova 2017” stage with the song “Up” this Sunday. “Up” is the second single from the EP “Moon + Light”, which is nominated for the award “Zelta Mikrofons” (Golden Microphone) as the best alternative or indie pop record. The producer of the album Reinis Sējāns (“Instrumenti”, “Reynsi”) has received the special award as the best studio producer of 2016.

The song “Up” can be heard on the streaming platform Spotify, online store iTunes and other channels for digital music distribution.

“Franco Franco” has been active since 2010. In 2013 the band released its debut EP “Color me”. In 2016 it returned with the second EP “Moon + Light” and the album presentation concert, actively performing in such festivals as “Playground Festival”, “Fono Cēsis”, “Piens Fest”.