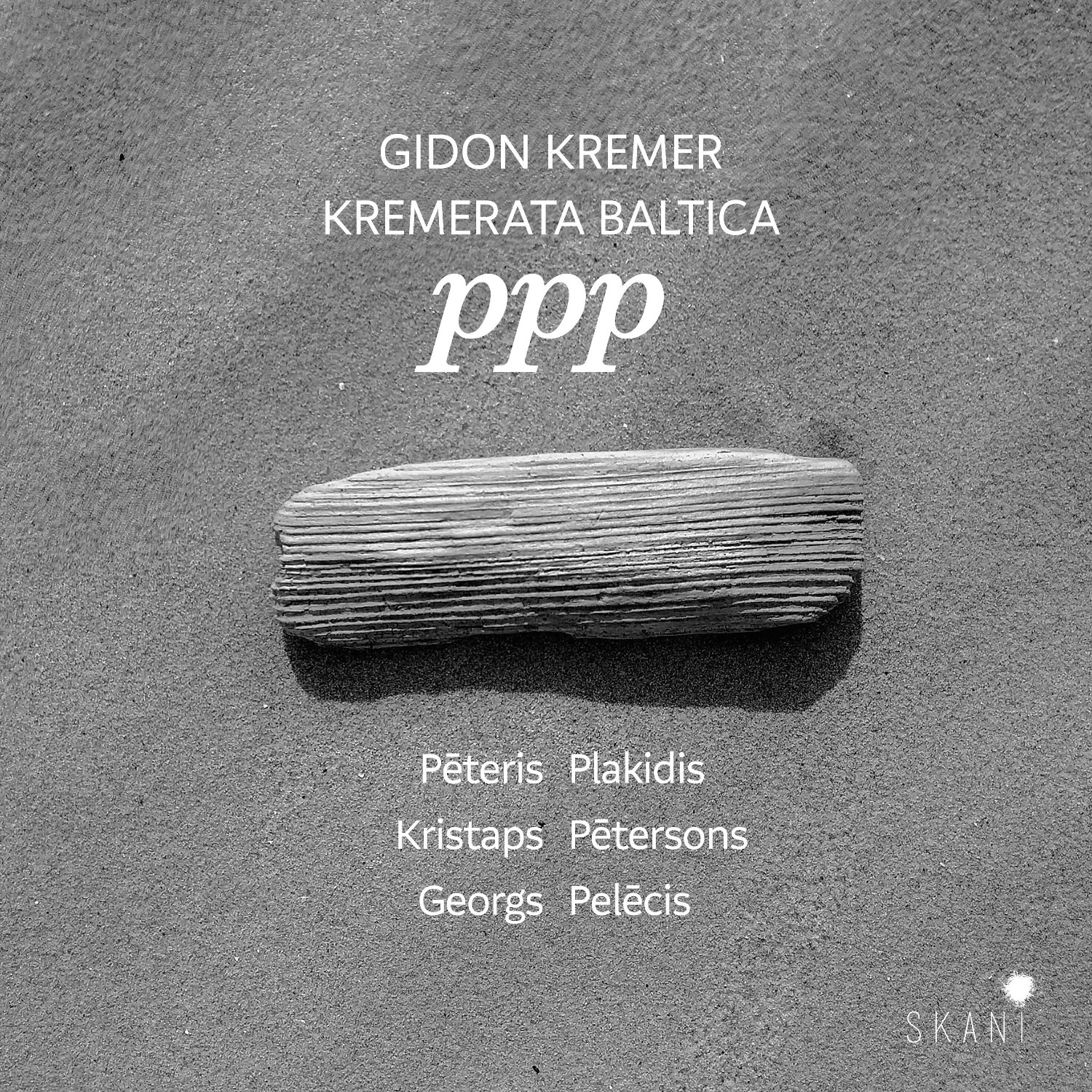 In honor of the 25th anniversary of “Kremerata Baltica” chamber orchestra, SKANi releases an album by the orchestra led by Gidon Kremer called “ppp”. The name contains abbreviations of the surnames of the three prominent Latvian composers Pēteris Plakidis, Kristaps Pētersons and Georgs Pelēcis. The subtlety of chamber music and the love towards detail by Pēteris Plakidis, mathematical precision and composure along with transcendent and mystical images by Kristaps Pētersons and naive, cheerful, brave characters alongside a melancholic reverie by Georgs Pelēcis make this release a bright example of the Latvian contemporary music. The album (CD, streaming and download format) will be released on June 17, 2022.

“My ideal is to serve music. In whatever form that may be, I take great joy in being a servant to this lady”

Pēteris Plakidis (1947–2017) is the greatest poet and interpreter of music among Latvian composers. According to his biography, he was also the “most academic”, because once he began his studies at the Jāzeps Vītols Latvian Academy of Music, he never left the school. Studies in composition were followed by an assistantship and then a professorship. He also had the most typical path of a Latvian composer regarding education and career: the Emīls Dārziņš Music School, the conservatory, head of the music department at the Latvian National Theatre, a popular composer of film music, also a co-creator of wonderful animated films. He embodied the bonds of artistic fraternity between composer and performer, between members of a chamber ensemble, between poetry and music, between poets and musicians. These bonds were stronger than any external conditions; Plakidis belonged to an age of musical “insiders” where only talent and insight mattered. The Little Concerto for two violins (1991) premiered on August 18, 1991, in the Wagner Hall in Riga. It was performed by Aīda Grieze and Andris Pauls, to whom it is also dedicated. Precisely thirty years later, Gidon Kremer and Madara Pētersone recorded the concerto specially for this album.

Kristaps Pētersons (1982) holds a bachelor’s degree with highest honors in double bass and composition (2005) and a master’s degree in composition (2007) from the Jāzeps Vītols Latvian Academy of Music. For outstanding accomplishments during his studies, he received the Arnolds Šturms Award and the Tālivaldis Ķeniņš Award. Pētersons has been a musician with the Latvian National Symphony Orchestra since 2005 and a musician and soloist with “Kremerata Baltica” since 2015. In 2010, he was awarded first place in the young composers’ category at the UNESCO-organized International Rostrum of Composers competition for his composition Twilight Chants recorded by the Latvian Radio Choir. Ground premiered in 1999, while π = 3.14 for two double basses, percussion and recording was composed specially for this “Kremerata Baltica” album. Pētersons is at times inspired by transcendent, even mystical things, yet at the same time his music possesses a mathematical precision and composure that gives the impression of immediacy and directness. The irrational number π (or pi or P) playfully relates to something as barely determinable to the ear as the tuning of a piano. Music for a Large Ensemble was written specially for the musicians of “Kremerata Lettonica”. It premiered on May 22, 2021, at the Wagner Hall in Riga as part of a concert honoring the centenary of diplomatic relations between Latvia and Germany.

Georgs Pelēcis (1947) is a composer and significant researcher and scholar of the history and theory of counterpoint. He studied at the Emīls Dārziņš Music High School in Riga and, encouraged by his classmate Gidon Kremer, continued his education at the Pyotr Tchaikovsky Moscow State Conservatory, where he studied composition under Aram Khachaturian, graduating in 1970. Seven years later at the same institution, he completed graduate studies in music theory under Vladimir Protopopov. Pelēcis began teaching polyphony at the Latvian State Conservatory (later, the Jāzeps Vītols Latvian Academy of Music) in 1970 and became a professor there in 1990. Pelēcis is a unique phenomenon in the cultural scene of the 20th/21st century. His ideal is euphony and harmony. His music is dominated by naive, cheerful and brave characters that exist alongside a melancholic reverie. Violinist Gidon Kremer – a friend since their youth – has proven to be a remarkable interpreter of Pelēcis’ music and an ambassador of his work. The Fiori Musicali collection of compositions is like a follow-up by Georgs Pelēcis to Flowering Jasmine, an opus he wrote in 2007 for Gidon Kremer. Pelēcis named this blooming garden Fiori Musicali after Girolamo Frescobaldi’s collection of liturgical organ music from the 17th century.

KREMERATA BALTICA is considered by music experts to be one of the best international chamber orchestras in the world, and with performances at important venues across the globe, it has secured an excellent reputation. In addition to regular concert tours throughout Europe, Kremerata Baltica has also performed at most of the major centres in Asia, Australia and North and South America. Kremerata Baltica has released several dozen albums, including recordings of music by Wolfgang Amadeus Mozart, Giya Kancheli, Leonid Desyatnikov, Astor Piazzolla, Raminta Šerkšnytė, Arvo Pärt, Pēteris Vasks and Georgs Pelēcis. It has received several prestigious awards, including a Grammy and Echo Award in 2002 and the Praemium Imperiale grant for young artists in 2009. The orchestra’s albums of works by Georges Enescu and Mieczysław Weinberg were both nominated for the Grammy Award, and its recording of Shostakovich’s piano concertos with Anna Vinnitskaya won the Echo Klassik award in 2016 for best concert recording (20th/21st-century music). It has received several nominations for the Latvian Grand Music Award and won Latvia’s highest state award in music in 1999 for outstanding artistic qualities in concert programmes in Latvia and popularizing Baltic composers worldwide. It also won the Latvian Grand Music Award in 2004 for the Shostakovich and Schnittke: Unfinished Century festival.

Violinist Gidon Kremer founded Kremerata Baltica in 1997 at the Lockenhaus Chamber Music Festival as a 50th birthday present to himself. The orchestra consists of musicians from the three Baltic states of Latvia, Lithuania and Estonia. One of its main aims is to inspire and promote musical growth in the Baltic region as well as encourage innovative programming and performance that is open to experimentation and poses bold challenges to the status quo. Kremerata Baltica has held its own, eponymous festival in Latvia since 2003. Since the orchestra’s inception, it has regularly collaborated with world-renowned musicians and conductors. In addition to Kremer himself, soloists have included violinists Vadim Repin, Lisa Batiashvili, Thomas Zehetmair, Baiba Skride and Kristīne Balanas; cellists Mischa Maisky, Mario Brunello and Yo-Yo Ma; singer Jessye Norman; pianists Mikhail Pletnev, Martha Argerich, Khatia Buniatishvili, Katia Skanavi and Reinis Zariņš; and accordionist Ksenija Sidorova. Guest conductors have included Saulius Sondeckis, Mirga Gražinytė-Tyla, Simon Rattle, Heinz Holliger, Ainārs Rubiķis and Andris Poga.

SKANi is a division of the Latvian Music Information Centre (LMIC). Funded by the Latvian Ministry of Culture, its goal is to produce high quality recordings of Latvian classical music performed by both emerging and established Latvian musicians and promote Latvia’s classical music heritage through its distinctive and varied programming. Founded in 2014, it has released around 100 recordings and is managed by a Latvian clarinetist Egīls Šēfers, who is also a Director of the Latvian Music Information Centre and Chairman of the Latvian Music Council. It has longstanding relationships with the Latvian Radio Choir, Latvian National Symphony Orchestra, State Choir “Latvia”, Sinfonietta Riga, Liepāja Symphony Orchestra and many other soloists and chamber music groups.

Music for a Large Ensemble