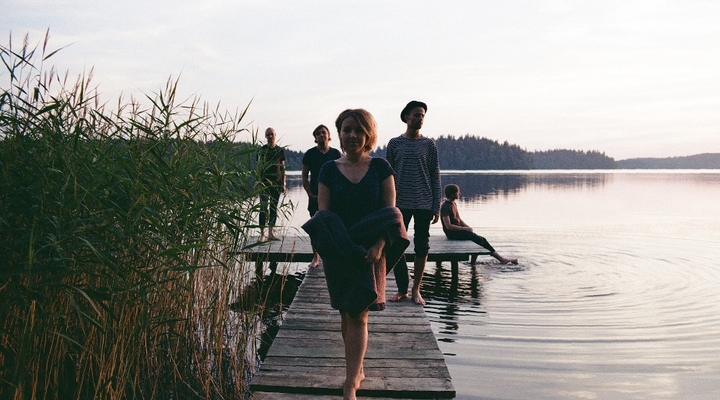 The Latvian Soul, r&b band “Kristine Praulina & The Soulful Crew” in collaboration with Riga Gospel choir releases a single called “Mountains” and a video of it’s recording process. It’s the first single of their upcoming album. “Mountains” is now available on all the major music streaming platforms.

“Mountains” is the first single from the  band’s upcoming first full-length album. The song tells a story of a search for Light in the time of darkness, the power of faith and the beauty that comes from a heart filled with gratitude. Kristine says: “I wish that this song would be an encouragement in these peculiar and trying times – to stop for a moment and listen to the inner quiet, to hear your own voice and the voice of God. It is this eternal perspective and peace of heart that can give us true and lasting joy in our everyday lives and as the song says – it can “move mountains inside our souls”.

“Mountains” was written specifically for Riga Gospel choir for Kristīne has been a part of the choir since 2003 and is currently it’s musical director. Riga Gospel choir is where Kristine’s musical journey began. Kristine about her love of gospel music: “I fell in love with gospel music at the age of 12 and it still moves me deeply every time I sing or hear it. We (RGC) have been dreaming of our own music for some years now and this is our first leap in that direction. I couldn’t be more excited about this release for it unites my two main musical passions – soul and gospel music and let’s our work with The Soulful Crew and Riga Gospel choir flourish”.

“Mountains” (music and lyrics, vocal and choir arrangements) was written by Kristine Prauliņa and these are her first steps songwriting in gospel music genre. The instrumental arrangement was created together with the band. The song was recorded in “Mint” studio in Riga, Latvia in January 2020. Studio and mixing engineer – Toms Lisments. Mastered by Tom Woodhead (GBR). Video made and edited by Reinis Janulis.

Kristine Praulina has been on the Latvian jazz music scene since 2013 when she won the International Jazz Vocalist competition “Riga Jazz Stage”. She has been actively working as a soloist in Latvia and abroad with bands like the Latvian Radio Big Band, funk band “Very Cool People”, “Alaska Dreamers” and many more ever since. She has recorded two studio albums with the legendary Latvian Maestro Raimonds Pauls. In 2018 “Kristine Praulina & The Soulful Crew” was born. That same year the band released an EP called “A Warmer October” with four freshly written songs. In 2019 they released a song in Latvian called “Kopā”, along with a video.

Riga Gospel choir is an active perfomer in the Latvian music scene since 2006. The choir has performed all over Latvia and in Norway, Estonia, Great Britain, Germany and other European countries, as well as the USA (Chicago, New York, New Orleans and more). Riga Gospel choir performed with the Grammy winner, gospel super star Donald Lawrence in Riga, Latvia in 2019. They’ve had collaborations with Karen Gibson (creator and musical director of Great Britain’s “Kingdom Choir”) and gospel greats Cynthia Nunn, Malcolm Williams, Walter Owens and Terry Moore for the USA. Riga Gospel choir has won two gold medals in the World Choir games.