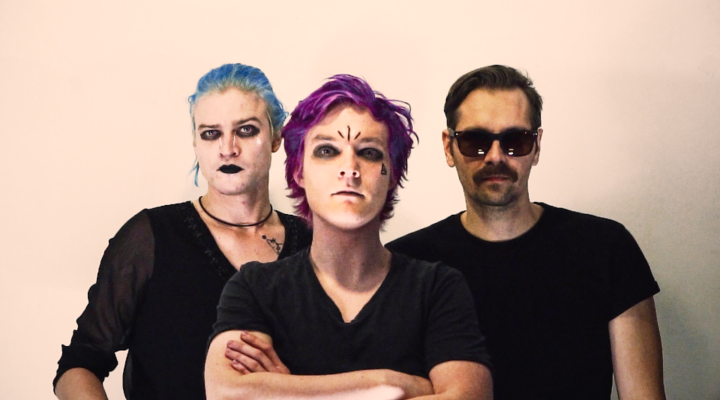 On November 16, 2020 a synth-rock band Dani Ryan from Riga released a new single called „Komett”. This single is the third release from the band’s upcoming album „PARTY !”, which will be out very soon – just a week after the single.

The song was released along with the music video, which was filmed and edited independently by the participants of the Dani Ryan project. It took three days to shoot the video – a team of 7 people was involved in the filming process. However all further processing of the filmed material and its editing was done by Dani Ryan’s lead singer –  Daniil Ravinsky. Daniil was also responsible for creating all the visual effects and animation in this and previous music videos of the band.  According to various calculations, the budget of the music video ranged from 20 to 35 euros, including food and drinks for the film crew and paying for taxis to deliver all the necessary equipment to the filming locations.

The plot of the video refers the viewer to the first single and music video of the band – RADIO ANNA. The song and the video tell us about the story of the main character Anna and her journey into outer space. Both the song „Komett” and the music video for it will tell us about what happened in Anna’s life before her travels and about the sacrifice she had to make to make her dream come true –  become an astronaut.

„Komett” focuses on the difficult choice between a dream and a happy, but ordinary life, the emotions of two people and, of course, love.

The lyrics to the song’s rap verse were written by Dani Ryan’s bass player Nikita Andrejevs, who also played the main character in the band’s new music video. An interesting fact is that at the time of writing the verse, Nikita had no idea what the song will be about and what kind of music it will have. All that was at his disposal – the rhythm and general theme of the future song , space precisely. This was done on purpose so that the already written lyrics and music would not be reflected in the lyrics of this rap verse.

The entire music video creation process took about two weeks – the same as it takes to review and approve a song for release on streaming platforms such as Spotify or Apple Music. The goal was to release a high-quality and interesting music video along with the release of the single. That is why the members of the Dani Ryan project invested in the creation of the video not only the maximum amount of their energy, sacrificing free time and rest after their day jobs, but also a piece of their soul.

The Dani Ryan team would like to express special gratitude for the magical mastering of the track to sound engineer Kaspars Greizis and the band Barta  for providing the filming location.

Dani Ryan was founded in 2015. In 2019, the band began its main activity, prior to this Dani Ryan changed members several times. At the end of last year Dani Ryan released its debut album OPEN.