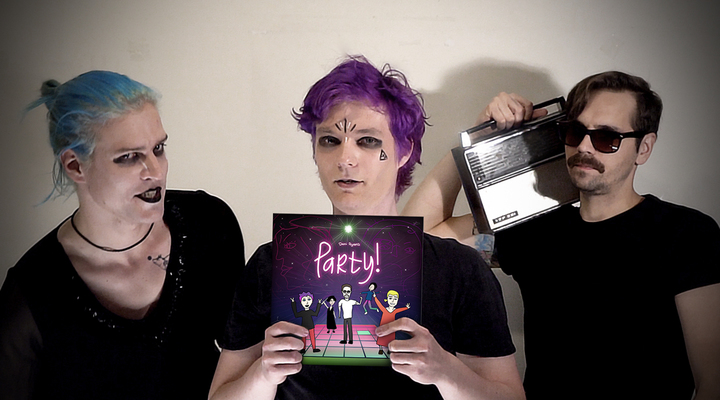 Unlike the band’s previous album, which was created in the time period between 2011 and 2019, this album was written entirely during this year. However the members of Dani Ryan had to choose 11 out of 25 written songs for „PARTY!”, so the music band already has ready material to create another full-fledged album. The point is to realease a b-side for „PARTY!”, which will be called „Afterparty!”. Its release is tentatively scheduled for the spring of 2021.

The goal was to create an interesting, dynamic album that would drastically differ in mood from Dani Ryan’s first album. The decision was made to use the elements of classic rock music and combine theme with unusual and unique sound effects – as, for example, in the songs „RADIO ANNA” or „Insta”. Meanwhile the song „Final call” is somewhat reminiscent of an indie rock classic. As the project developed, songs with female vocal parts also appeared – „Bring a little lovin’” and „Relax”. Furthermore, the album also got complemented with an unexpected electroclash track from Dani Ryan’s bass-player called „Touch my dress” and a spontaneously recorded song in Latvian „Meloman”.

Just like any creative process, the making of this album had many interesting moments. For example, the title track „Party!” went through many changes. Five different versions of the recording were reviewed, the lyrics were rewritten three times and the song was re-mixed many times too. Another track, „Meloman”, on the other hand, was written in one evening and all the instruments and vocals were recorded from the first try.

Since the band members wanted to see „PARTY!” as not just a collection of Dani Ryan’s songs, but as a complete piece of art, much attention was paid to compiling the sequence of songs in the album. It was changed about 15 times until the desired composition and effect were achieved. The team also took creating an album cover very seriously – its appearance has repeatedly changed during the making of the album.

The entire album was composed and recorded at Dani Ryan’s home studio, with the only exception being the track „Touch my dress” – all the credits of this track go to the band’s bass player Nikita Andreyev. The rest of the album’s material was recorded and mixed by Dani Ryan’s frontman and leader Daniil Ravinsky at his home. In turn, he would like to thank sound engineer Kaspars Greizis for giving advice in the process of working on the sound and for the final mastering of the album.

Dani Ryan was founded in 2015. In 2019 the band began to be active, but before that the band changed several members.