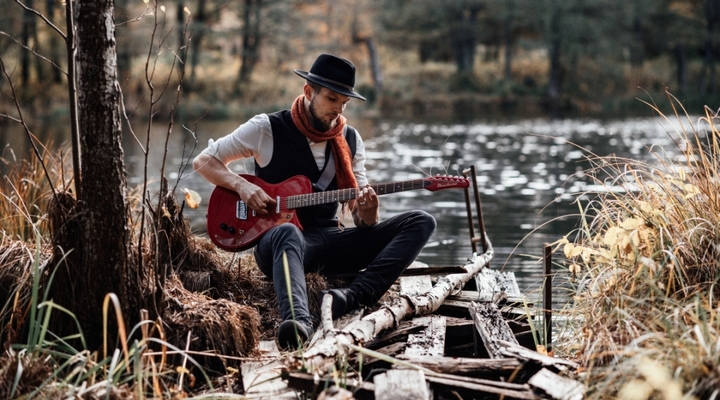 Guitar player and music author Rihards Lībietis releases a new video for the composition “Miniature on Being”, which is the third single from the new album “Lines and Miniatures”, published at the end of October.

Composition “Miniature on Being” is a reflection on melancholy, search for inspiration, about impossibility of a true loneliness and finding strength within oneself. It’s composer and performer Rihards Lībietis reveals: “This is one of my favourite pieces of the new album – it’s quite a simple composition in its essence and instrumentation, but at the same time it’s a very fragile, emotional and sensitive work. It also includes sort of existential ruminations about someone always being there for us, even if we may not be aware of it. I sincerely hope that this composition will bring warmth, strength and self-acceptance to the listener.”

Video for the single was filmed at the end of the autumn in forests of Lilaste near the three lakes. It’s DOP and director is Janis Romanovskis, who says: “Music of Rihards Lībietis can take us on endless existential reflections and that is what directed our approach for the video – it’s filmed as a meditation in nature, reflecting in the music and catching the passing autumn in raindrops. A possibility to tune in on the artists’ soul through a combination of the music and eyes.”

“Miniature on Being” is an instrumental composition for the baritone guitar. It was recorded in “No Fuss Audio” studio in Tukums, its sound director is Valērijs Černejs. The composition can also be heard in the theatre performance “Upe” in Liepāja Theatre, directed by director and choreographer Kristīne Brīniņa. The performance was nominated for “Spēlmaņu Nakts 2020/2021” award.

The single “Miniature on Being” can be heard on all music streaming services, including Spotify.

“Lines and Miniatures” is the second original music album by Rihards Lībietis. It includes ten instrumental compositions, thematically dealing with feelings and events of the last year – especially loneliness, melancholy and uncertainty. At the same time, music is brimming with inspirational, energising and uplifting emotional charge. While originally intended as a solo-album, the album features various guest artists – Toms Kagainis (Drums, Percussion), Erna Daugaviete (Cello), Olga Bucinska (Violin), Ieva Rutentale (Flute), Matiss Repsis (Piano) and Beate Zviedre (Voice). Album was made with the support of AKKA/LAA Author Scholarship and is available on all music streaming platforms.