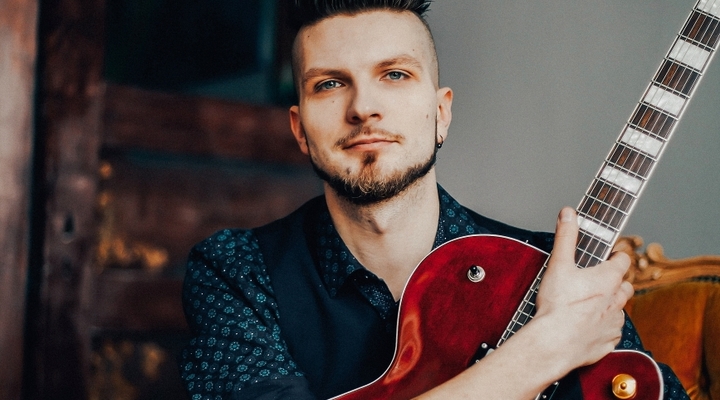 Guitar player and composer Rihards Lībietis has released a new single “Transcending Parallels” from upcoming album “Lines & Miniatures” due to be released at the end of October. A music video for the single directed by Jānis Romanovskis has also been released.

The new composition “Transcending Parallels” is a story of transcending various borders – real, imaginary, either created inside ourselves or established outside – and achieving a next level.

The single was recorded under guidance of sound designer Valērijs Černejs in “No Fuss Audio”, Tukums and “AMFO Music” studio in Riga. Drummer Toms Kagainis is also featured on the record not only recording drums, but also percussion elements by using various objects found in the studio in a stroke of inspiration – kitchenware, knives, metal water bottle among many others.

Rihards Lībietis says: “At the beginning the idea behind the project was to create a guitar album – by using various playing techniques, looping etc, but strictly keeping the focus on one instrument – but, as the writing process started, music evolved and it was clear that more sound layers should be added with different instruments. This track “Transcending Parallels” actually was the first demo for the album. It’s still possible to perform this song by using just one guitar and a loop station. Of course, the sound is now on a completely another level thanks to the inspired effort of Toms Kagainis and phenomenal support from Valērijs Černejs with his insight on achieving a great studio sound.”

Its director and DOP Jānis Romanovskis: “Rihards sent me the music and let me roam free with ideas. After listening to the song many times, this video came together – a little bit about rush, about getting lost in labyrinths. We filmed using timelapse, technique which is usually used in breathtaking nature videos, but this time let us play with time – allowing us to press long filming episodes in a few seconds.” The new album “Lines & Miniatures” is set for release on October 26th, being the second original music solo album by Rihards Lībietis. It can be considered an ideological successor to musicians first solo album “RL Elektronix”, released in 2015. “Lines & Miniatures” will feature 10 compositions and appearances from Toms Kagainis and other guest artists. Album was created with the support of AKKA/LAA Author Scholarship.

“Transcending Parallels” can be heard on music streaming platforms, including Spotify.

Rihards Lībietis is a musician and music author, regularly performing with various Latvian musicians and bands, mainly in “Rihards Lībietis Orchestra”. Rihards also composes and performs music for theatre plays and contemporary dance performances, such as “Upe” (2020) in Liepāja Theatre, “Bannija Manro nāve” (2017) and “Izraidītie” (2014) in Dailes Theatre and others.