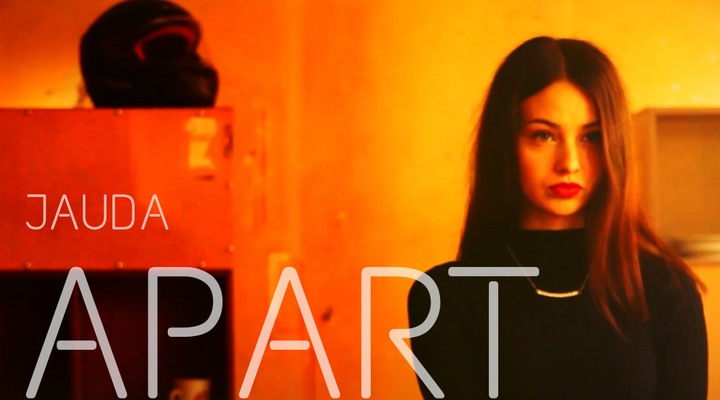 This is the third single from upcoming album. Song “Apart” is the story of any two people who have truths of their own. Being in the same space doesn’t mean that people are close and it`s time when you just don’t know what`s true.
Song was written in JAUDA music studio in summer 2020 and later in september music video was filmed in collaboration with female actress Simona Groskaufmane. This time music video is made as an allegorical short film showing that behind the mask of peace and common sense, people hide their true emotions, desires and expectations towards the other person.
The music video has an escalating energy, where in the outburst of emotions the feeling of freedom is created by fast riding a motorcycle, while throwing dishes against the wall symbolizes bill concluding with the past, where all the hopes that were once placed on each other were destroyed.

JAUDA (Force, Power: in Latvian) is a music band founded in 2016 in Latvia (Livani), the group plays pop-rock and rock style. Combining bass, drums, electric guitar and vocal sounds, the band creates a unique, live sound in their recordings and concerts.
JAUDA released their first album “Durvis atvērtas” (Door Open) in May of 2018 and all songs were in latvian. Currently, JAUDA actively plays in local festivals and clubs, as well as abroad.
In 2020, JAUDA released three singles from the upcoming album: “Eyes”, “Love and Sunshine” and “Apart”. At the moment, the band is working on a new album, where all songs will be in english. Musicians are also working on several new music videos. JAUDA – it’s not a story about pink glasses, it’s a realism of life with gray days, beautiful moments and real emotions that are served on a musical tray. JAUDA is a force that lives in each one of us – we just have to figure out how to use it.