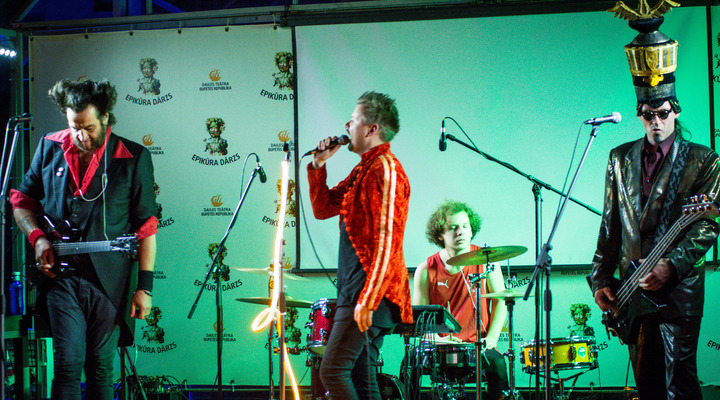 On 2 June at the Daile Theatre’s café Epikūra dārzs in Riga, RYGA presented its debut album. Clad in extravagant outfits, the musicians delivered a convincing performance as they introduced the audience to the material from the album Catch Her Groove, as well as the new video for the song Bunny Munro Waltz.

At the album presentation, Mārcis Judzis, the founder, drummer and lead singer of the band, said: “This is a big day for us – we are releasing our first album, which we ourselves received only yesterday. Thanks to everyone who invested their energy and time in the making of it. Thanks to MicRec Publishing and Microphone Records for their trust. When I first met Guntars Račs and told him about our project, he was sceptical, but after a while, he admitted: “Damn it, Mārcis, you are one heck of a marketing specialist!””

RYGA energised the audience with an hour-long upbeat concert. This was only their second performance since the joining of the multiartist and guitar player Kaspars Bindemanis. The loud event was visited by the municipal police too, but everything ended peacefully, with no arrests or fines. The arrival of the police resonated with the band’s performance and lyrics.

Among the well-wishers was Dž.Dž. Džilindžers, the director of the play The Death of Bunny Munro, which features songs from Catch Her Groove. “Mārcis created the band back when they were staging Banishment. However, that madness was not suitable for my new play, to which Mārcis responded that they can do it all – jazz, symphonies, you name it. And I believed him right away, yet at the same time not completely… I am very happy with this collaboration, though. I think it is fantastic that Bindemanis has joined the band because he’s a great fit for this bunch of freaks. It is without a doubt the No. 1 band at the moment, which is bound to see success in Europe too. I’m looking forward to the next chapter!”

The album can be ordered in CD format from the MicRec website. Electronically, it is available on all music downloading and streaming platforms. A few months later, the album will be released and distributed in Germany, Switzerland and Austria too in collaboration with Rough Trade and Gordeon Music.