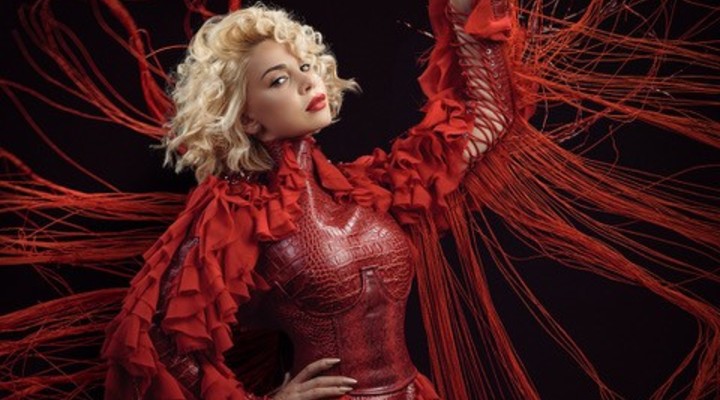 Tonight (May 20), Latvian singer Samanta Tīna will take the stage of the International Eurovision Song Contest, where she will represent Latvia with the song “The Moon Is Rising”. Samanta will participate in the second semi-final as 15th contestant and will fight for the opportunity to perform in the Eurovision Super Final on the evening of May 22. But before that Samanta has decided to please the audience by releasing a new song “I’m The Woman”.

“Since I’m in Rotterdam right now, I think it would be great if I could release a new song in the evening of my Eurovision semi-final because this song is exactly on the same topic as my Eurovision song “The Moon Is Rising” – the power of a woman – “I’m The Woman,” says Samanta.

The single “I’m The Woman” was made in a songwriting camp, which was organized especially for Samanta in the autumn of 2020 in cooperation with the “Latvian Music Development Association/Latvian Music Export”. The aim of the camp was to write a strong and competitive song with which Tīna could participate in the Eurovision Song Contest in Rotterdam. Eleven demo versions of the songs were recorded at this two-day long camp, from which the single “The Moon Is Rising” was chosen as the Eurovision song, and the song “I’m The Woman” Samanta ranked in her TOP 3. “I ranked all the songs from the camp in order, to choose the right one for Eurovision, and this song was convincingly in my TOP 3. It was made on the second day of the camp, and Arnis Račinskis and Jānis Jačmenkins worked on it,” reveals Samanta.

“The story of the song is like a flowing and natural continuation of my Eurovision song “The Moon Is Rising” – about accepting yourself and that we must learn that what makes us different from each other – that is our uniqueness. Love yourself, keep your head up and go your own way no matter what others think of you. We each have our dreams and goals, and the only one who can or cannot achieve them is you! Be unshakable! Head up and go boldly to make your dreams come true!” urges Samanta.

“While we are in Rotterdam, a TV directing consultant for the Eurovision performance Juris Matuzelis (Pepe) and I created the lyric video for the song “I’m The Woman. In our spare time, which is extremely limited here actually, we continue to work on new material. I am currently working on my new album,” reveals Samanta Tīna.

“I’m The Woman” will be available on Spotify, iTunes, Deezer and other music streaming platforms soon.

Already tonight, May 20, the second semifinal of the International Eurovision Song Contest will be broadcast live, where our national representative Samanta Tīna will perform as 15th contestant.

Samanta Tīna won “Supernova 2020” with the song “Still Breathing” and earned her chance to represent Latvia in the Eurovision but it was cancelled due to the pandemic, therefore the Latvian Television (LTV) has given Samanta the opportunity to participate in the Eurovision Song Contest this year.