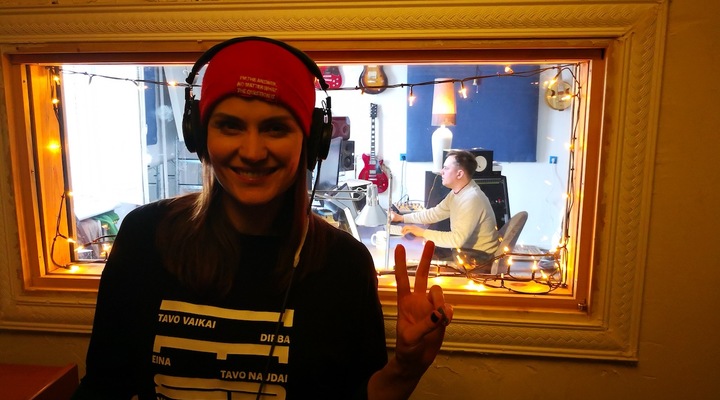 The song “(My Heart Beats) Staccato”, which was co-written by Kaspars Ansons, Kristīne Prauliņa and Valters Sprūdžs, is one of the songs which were created during the fall session of the songwriting workshop “RIGaLIVE”. The song is performed by Lithuanian singer Jurga and it was produced by Kaspars Ansons.

Jurga herself has this to say about the song: “It’s always a great opportunity to record a song, which was written by someone other than me, especially in this case, because it is so catchy. I hadn’t done that for quite a while, but I was waiting for such a challenge, and it came to me in the form of  Staccato. I really like the chorus – even if someone doesn’t know what do the terms stacatto or legato mean, it still is really easy to understand, because it reminds of the feeling when you’re in love.”

This song, performed in Lithuanian, will be made publicly available in Lithuania in May. The lyrics were composed by Jurga.

The first session of the “RIGaLIVE” songwriting workshop, which took place in September 2017, was highly praised by both local and international participants and experts. During the process, 16  demo versions of the songs were created in 2 days and they were recognized by local and international music experts to be potential radio hits of a high quality. There were 30 participants for the first “RIGaLIVE” session – artists such as Dons, Justs, Aminata, Kaspars Ansons, Kristīne Prauliņa, Arnis Račinskis, Jānis Aišpurs, Markus Riva, as well as participants from Estonia, Lithuania and Scotland.

The second session of “RIGaLIVE” ended on 11th of April, with 27 participants from Latvia, Lithuania and England. During this session, 16 new songs were created, a few of which will soon be released publicly.