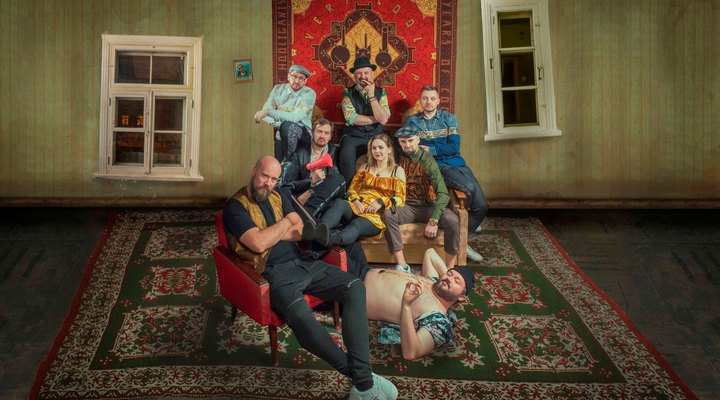 The most famous Latvian jazz-funk band “Very Cool People” continues its artistic flight at unlimited heights. Their eighth album “50 Years of Influence + 30 Years of Cool Equals 13 Years of Music Hooliganism” is a positive musical irony about Latvia’s turbulent recent history. There is also a new video – the fifth single “Rapid Dough – Pelmjakški” from this album.

With this instrumental music album, the band members pay tribute to their teachers and the previous generations of musicians, who helped jazz and rock and roll to survive behind the Iron Curtain, as well as get through the crazy nineties in the Baltic States. Everything is already mentioned in the title of the album – jazz here is intertwined with classical music, Balkan music with metal, surf music with funk and soul, but choral music with klezmer and the musical heritage of other peoples living in Latvia.

This is an instrumental album of original music, where compositions are written by the group’s guitarist and bandleader Elvijs Grafcovs, saxophonists Māris Jēkabsons and Kristaps Lubovs, drummer Andris Buiķis and the group’s keyboardist Māris Vitkus, for whom this is his debut in composing.

This is the band’s eighth album and the fifth in the row released since 2017, the band still fulfilling their promise to release a stylistically different new album every year, which at the same time is paying homage to the work culture of musicians in the past.

The album was recorded in the legendary basement studio of the Riga Reformed Church “Mints Music Studio” by no less than the legendary recording engineer Tālis Timrots. Andris Buikis mixed the recorded material in Ciemupe & the whole group’s members relentlessly and pleasantly commented each step of the mixing process. The record is produced by Elvijs Grafcovs and mastered by the master legend Dave McNair at the Dave McNair Mastering Studio in North Carolina, USA.

The colorful design of the album was created by Gatis Pakalns – a designer living in London, who 14 years ago created the already famous “Very Cool People” cats and who time after time cooperates with the group since. The cover of the new album is decorated with a photo of a real 2 x 2 meter carpet attached to the wall like in the “good old” Khrushchyovka apartments. This rug was custom designed by Gatis Pakalns & produced in Belgium, as it turned out to be the closest place to order such specially designed rugs.

The design expressions of the band did not end with that, the wall itself was specially prepared for the photo session of the album booklet – Māris Vitkus glued special wallpaper from Latvia’s past, inherited from his grandfather. Then Elvijs and Māris bought an equally authentic sofa in a Riga Khrushchyovki architecture district, which then became the main photography platform for all the members of the group. The author of all the photos in the design of the album is the embodiment of rock and roll both with and without a photo camera in his hands – Jānis Škapars. The overall idea of the album’s design flares somewhere between an old Eastern Europe family album and artifacts from music lovers of the 1990s.

Along with the new album, the band is also releasing their fifth single and video “Rapid Dough – Pelmashki”. This video includes characters from all the previous music videos related to the new album, so this is considered the grand finale, where all the videos come together.