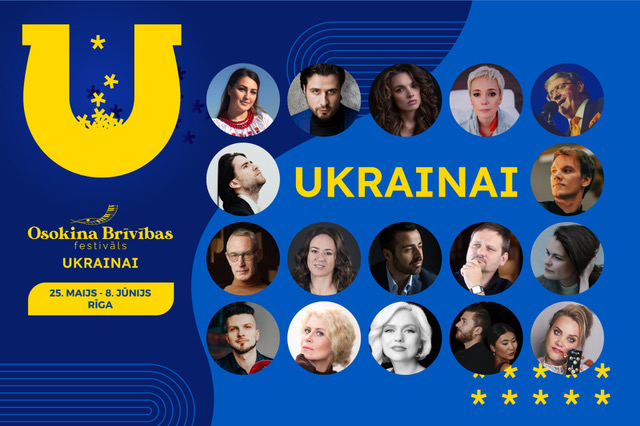 The third Freedom Festival by Andrejs Osokins will be held in Riga from May 25 until June 8. As a reaction to Russia‘s military aggression, this year’s festival is dedicated to Ukraine. Currently six concerts are being announced, taking place at these venues: the Black Heads House (Melngalvju nams), Hanzas perons, Piano salon @152 and the Anglican Church. A multitude of artists, well-known both in Latvia and globally, will come together for this festival, among them are Dita Lūriņa, Chulpan Khamatova, Ģirts Krūmiņš, Ralfs Eilands, Georgijs Osokins, Raimonds Tiguls, Žoržs Siksna, Katrīna Dimanta, Roberto Meloni, Katrina Gupalo and Andrejs Osokins himself as well as musicians and actors from Ukraine who came to Latvia seeking shelter from the horrors of war. In cooperation with “Biļešu paradīze” and the Ziedot.lv foundation all proceeds from ticket sales will be donated for the support of the Ukrainian people.

“It is more than obvious that Russia’s military attacks and their military operations in Ukraine will change the world. But in what way – that depends on each one of us. Right now, not only weapons and world leaders hold power but each and every person can influence what is happening – with their voice, be it live or virtually, their actions, their help, their support and their decisions. Ukraine and its courageous people  have been fighting relentlessly for the existence of their country and their people, the future of Europe with its ideals and its freedom. That’s why we must keep up our energy in helping and supporting Ukraine”, says Andrejs Osokins, initiator of the festival.

The first two concerts will take place at the piano salon @152 which the audience already knows from the past two Osokins festivals. On May 25 we will hear Andrejs Osokins, Katrina Gupalo, Žoržs Siksna, Ģirts Krūmiņš and a piano duet by Roksana Tarvide and Kaspars Bumbišs in a very personal setting, a grand and masterful opening of the program. On May 27 pianist Georgijs Osokins will be playing a solo concert at his brother‘s festival for the first time, performing music by Wolfgang Amadeus Mozart, Frédéric Chopin, Tōru Takemitsu, Stephen Hough and Alexander Scriabin.

On May 28 Chulpan Khamatova, actress at The New Riga Theatre, and Andrejs Osokins will present their poetic performance at the House of the Black Heads. The performance was created especially for this festival and combines music by Ukrainian composer Valentin Silvestrov, Frédéric Chopin and Volfgangs Dārziņš with poetry by Bulat Okudzhava, Alexander Galich and Osip Mandelstam. During the concert the recently composed piece for piano “Vairs nekad!”, dedicated to Ukraine, by Aivars Kalējs will have its premiere.

Continuing the festival on June 3, Katrina Gupalo, Andrejs Osokins and Roberto Meloni will present a concert program full of temperament and warmth containing French, Spanish and Ukrainian songs, music from movies as well as piano pieces by Gerorge Gershwin and Claude Debussy.

The “Concert of the Soul” on June 4 featuring mezzo-soprano Ieva Parša, pianist Iveta Cālīte and Urkainian bayanist Irina Serotjuk, Katrina Gupalo with a string quartet and a choir and festival initiator Andrejs Osokins will be the first concert at the Anglican Church after its reconstruction. The program will include Latvian and Ukrainian folk music, songs by Katrina Gupalo, Emilis Melngailis and Kristaps Pētersons as well as music by Ukrainian composers Volodymyr Zubytsky and Myroslav Skoryk.

The festival will finish with a special highlight on June 8 when Latvian and Ukrainian musicians and actors will perform together on one stage. During the first part of the concert we will hear Dita Lūriņa, Raimonds Tiguls, Katrīna Gupalo, Ukrainian clarinetist Nazar Hizhyi and Andrejs Osokins. The second part will feature Latvian-Ukrainian duets, trios and groups created especially for this festival, establishing new and artistically fascinating cooperations that might otherwise never have happened. Among the Ukrainian musicians will be singers Larisa Shelest, Anastasiiya Yatsenko, Anastasiiya Vasilenko, Evgeniya Nasonova, violinist Valeriiya Mustafina, pianist Artur Nikulin, Jazz pianist Edgars Vilcāns and more who will be joined by Katrīna Dimanta, Ralfs Eilands, Gints Smukais, Rihards Lībietis and other Latvian artists. The final performance will be the song “Resistance” by the united artists of “Latvia for Ukraine”.

Larisa Shelest, singer and participant of the festival, explains: “My hometown Berdyansk was completely occupied by the Russian army. For almost two month now there has been no gas or heating, they are running out of medicine, food is incredibly expensive and it is exceedingly difficult to buy petrol. It is almost impossible to get out of there due to the active military operations happening close to the borders of the city, many roads are mined or destroyed. Newborns receive Russian citizenship by force. Recently Berdyansk shut down all mobile communications and the internet, so I can‘t contact my parents there anymore. I don‘t know when or if I will ever see my family and friends again. Every single person‘s  support in Latvia or elsewhere in the world helps us to gain freedom, return home and rebuild our country!”

One of the biggest partners of the festival, the shopping center „Spice“, stresses that there is no place for war in our modern world and that we all together need to find ways to support not only the victims of the war but also each other.

“In these challenging times we stand up for peace and freedom. For the people of Ukraine. Therefore we are grateful to the organizers of Andrejs Osokins‘ Freedom Festival for their initiative and are happy to be a part of this event. The guests of the festival will not only help the people of Ukraine but hopefully find some much needed peace of mind thanks to the versatile program and the talented artists,” says Iveta Priedīte, head of the shopping centers „Spice“ and „Spice Home“.

Entry to the festival will be free of charge to all refugees from Ukraine currently living in Latvia. The festival team invites them to send an e-mail in Ukrainian or Russian to edgars_vilc@ukr.net in order to get free tickets.

The festival team is grateful to the artists and partners, thanks to whom all proceeds of the ticket sales can be donated to supporting Ukraine.

The program of the festival and ticket purchase can be found at all “Biļešu paradīze” offices as well as online: https://www.bilesuparadize.lv/lv/custompage/3074. When purchasing tickets for the festival no service fee will be charged. More information about the festival can be found on this website: www.alartists.com.