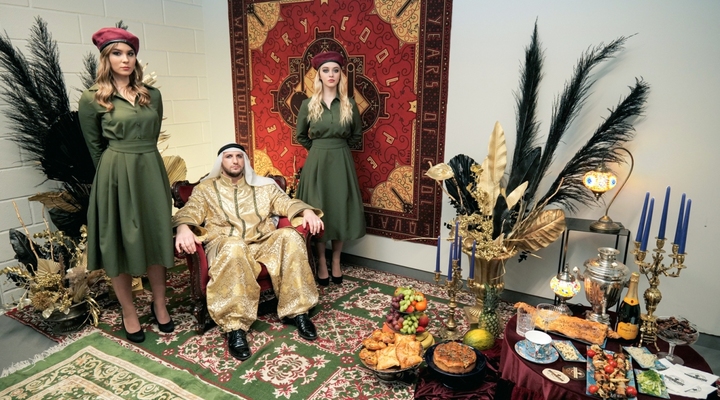 The coolest Latvian jazz-funk band, “Very Cool People”, does not intend to stop its flow of creativity; the band is releasing a new single dedicated to the group’s trumpet player and kebab tycoon – Oskars Ozoliņš.

The band’s biggest fans have already heard the tribute to Oskars as VCP have played the song in all the concerts that were possible in these unusual times. The group’s spokesman and guitar guru, Elvijs Grafcovs, explains that he wrote the song to call Oskars to sound checks. “It is vital from time to time, as he is often late for sound checks. Being the owner of a kebab empire and a kebab mogul is time-consuming and Oskars regularly flies to Abu Dhabi and Ankara to find out the latest trends in kebab recipes and implement them into his powerful brand – Oskar’s Kebab, his fast food empire which stretches from Helsinki to Casablanca and from London to Ankara,” says Elvijs.

“This story probably sounds very delicious, because it turns out that there are people who have really been looking for Oskar’s kebabs,” says Elvijs with a tireless smile on his face. “I have told this story on Latvian and Lithuanian televisions, as well as at festivals and concerts in Latvia, Lithuania, Estonia, Romania, Hungary and Germany. For example, one Lithuanian fan was very angry that Oskars was not in one of our concerts (Andris Augstkalns played with us instead), because Very Cool People’s “Oskar!” had become his favorite song, so he came together with the rest of the crowd and desperately tried to call Oskars, however … He also met us afterperforming at the “Nida Jazz” festival in August last year and shouted desperately: “Oskar!!!”

There was nothing left but to ask him to record a video message for Oskars which was so emotional & true that we decided to use it as an introduction to the new single, replacing the words of outrage of this southern fan with the sounds of Oskars’ trumpet.” The energetic single comes together with a no less enthusiastic video. It is the story of social inequality within the group. All Very Cool People members are equal, but some are more equal than others. In the clip Oskars goes to a concert in a separate car & in addition, he also has a separate back stage area. The video also depicts the group’s view of the current situation in Latvia and the world caused by the pandemic. Most restaurants and other quality catering brands are denied the opportunity to work. The only ones that continue to operate successfully are fast food restaurants. As you know, food is a big part of the local culture, as is music anddance. Accordingly, the culture of many nations of the world is currently suffering, so in the commercials accompanying the single, VCP are ironic about the advertising campaigns of large corporations and the stories of their lucky employees in these companies.

The group has gone even further and has created the Oskar’s Kebab corporate design logo with the advertising slogan: “Oskar’s Kebab – Feast Like A Beast!”, as well as a webpage, and had branded napkins and t-shirts printed. “We also wrote the Oskar’s Kebab jingle and filmed Oskar’s Kebab commercials,” continues Elvijs. “In the commercial Oskars is portrayed as an Arab sheikh, the boss of the kebab empire. And logically the Oskar’s Kebab website is also up and running where you can try to place orders…”